Inspired by miniature wargames, the first version of D&D used a rule system borrowed (and modified) from the 1971 medieval miniature wargame Chainmail. A notable difference between D&D and traditional wargaming is that D&D allows for each player to create their own avatar character instead of dealing with military formations.

D&D is commonly recognized as the starting point for the modern role-playing era and its success in the 1970s served to kick-start the modern role-playing game industry. The popularity of D&D led to the creation of a multitude of similar game systems, but D&D is still the market leader today, nearly half a century after its original release. In 2004, when D&D was 30 years old, an estimated 20 million people had played the game, and worldwide books and equipment sales had reached $1 billion USD.

The only items required for a game of D&D are the rulebooks, a character sheet for each player, and a sufficient number of polyhedral dice. The most recent version of the rules is detailed in three core rulebooks: Player´s Handbook, Dungeon Master´s Guide, and Monster Manual.

Some gaming groups elect to use props, such as miniature figures placed on a grid map to visualize battles. (Some D&D editions even presume that the group have access to such props.) 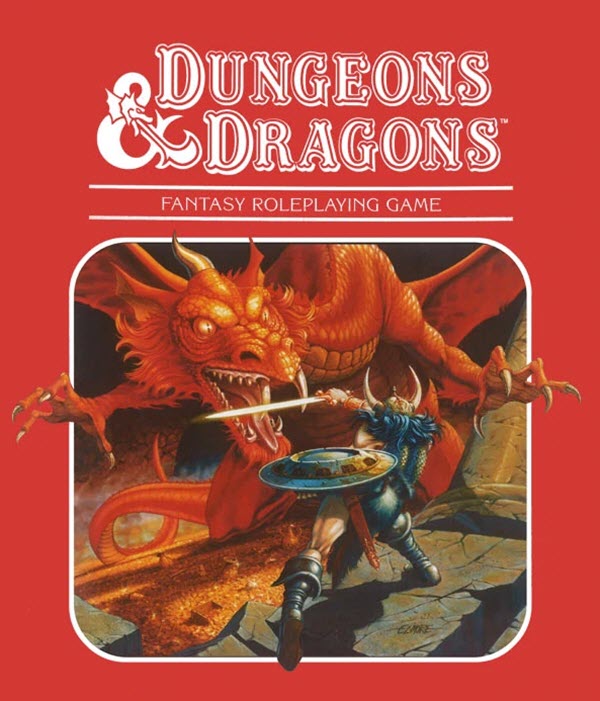 The original D&D was designed by Gary Gygax and Dave Arneson, and published in 1974 by Tactical Studies Rules, Inc.

From 1997 and onward, D&D has instead been published by Wizards of the Coast.

In 1977, Dungeons & Dragons was split into two branches:

Players of D&D use polyhedral dice to resolve many in-game events.

The various dice are abbreviated by the letter ”d” followed by the number of sides.

d4 = a dice with only four sides

d8 = a dice with eight sides

d12 = a dice with twelve sides

d20 = a dice with twenty sides

In many situations, the outcome of the dice are combined with the character’s abilities to determine the result of an attempted action, which means that character characteristics such as ability scores ans skills will have an impact.