A wide range of role-playing game systems rely on dice, and players need to have access to several types of dice to determine the outcome of various actions and situations.

In essence, a die is a throwable object with marked sides that can come to rest on any of its sides. It is therefore possible to create many different die designs, with varying numbers of options for the outcome. A die with only four sides have only four possible sides for it to land on, while a die with twenty sides have twenty different sides, making a big difference for the game dynamic.

Most dice used for role-playing games are marked with a unique integer in numerical order, e.g. 1-2-3-4-5-6 if the die has six sides. This is a configuration we recognize from many other games where dice are used. Marking the sides with numbers are common, but dice marked with pips also work well – although using pips becomes less convenient for die with a large number of sides. On a numerical die with at least nine sides, it becomes necessary to mark 6 and 9 with an underline or similar to avoid confusing them with each other.

To complicate things further (and make a game more varied and exciting) it is possible to use dice with more than one number per side. In Dungeons & Dragons RPG, the standard four-sided die have three numbers per side.

Although it is less common, not all dice have have to be marked with numerical values – other symbols can also be useful in certain contexts, especially if the symbol does not have to be translated into a numerical value to determine the outcome of an action or situation. One example of a role-playing game that comes with dice adorned with non-numerical symbols are Genesys from Fantasy Flight Games. This game comes with six different dice adorned with symbols for success, advantage, triumph, failure, threat, and despair. 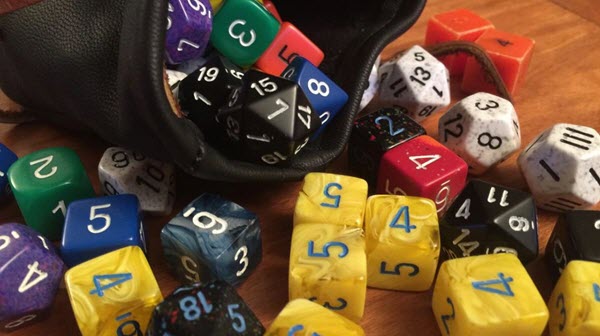 Dice are an integral part of Dungeons & Dragons roleplaying, and are used to add randomness to the adventure. Players decide to attempt various actions, but it is the roll of the dice that help determine the outcome.

One example of when dice are required are during battles. Typically, a D&D battle will consist of three parts.

Standard set of dice for D&D

The standard set of dice for D&D consists of seven dice.

D8: A die with eight sides.

Many sets will include two D10 instead of just one, since two D10 can be used for percentage rolls.

A die with four sides is normally used to determine damage for the smallest weapons in D&D. It has only four sides, but three numbers per side. The number at the top of the pyramid is the number that counts for the roll. You will see that number at the top on all three visible sides for the die, and it will be the only number positioned straight up.

Most modern-day dice games, from Craps to Monopoly, uses one or more D6 dice. It is a six-sided cube, and this is the type of die most people think of when they hear the words die or dice.

In games such as Craps, Monopoly, Yahtzee, etcetera, the D6 dice are normally marked with pips instead of numbers, but for dice sets intended for Dungeons & Dragons, having number markings (1-2-3-4-5-6) instead of pips is more common.

In D&D, the D6 die is typically used to determine damage done by weapons and spells.

The D8 dice has eight sides, and it looks like two pyramids fused together at their respective bases. In D&D, this dice is typically used to determined damage done using weapons that can be wielded in one hand, such as swords. (The kind of weapons that leaves the other hand free to hold a shield.) For weapons that do 1 to 8 points of damage, the D8 is ideal.

In D&D, there are specific weapons and spells that do 1 to 10 points of damage.

Additionally, two D10 dice can be used when the Dungeon Master needs to determine the chance of something being successful. (Chance as expressed in percentage.)

Having two D10 of different colours is convenient, since you can decide that one colour will determine the first number and the other colour the second number. You can then throw them out at the same time to get the percentage. Example: Red die 8, blue die 4, the chance of success is 84%.

Example from a game: You need to cross a worn out bridge wearing heavy armour The DM throws the two D10 dice and, after factoring in other aspects of your character, determines that your chance of crossing the bridge without falling into the river below is 65%. It is now you turn to roll the dice. If you roll 65 or above, you cross the bridge. If you roll 64 or below, you fall into the river.

This D12 is used to determine battle damage for large weapons, and some spells, that do 1 to 12 points of damage.

In battle, the D20 determines who strikes first and how accurate the strike lands.

A simplified example from a game: You encounter a troll that blocks the door. You roll the D20 and gets 15. The DM rolls the D20 on behalf of the troll and gets 13. You strike first, and roll the D20 die again. The troll is wearing a leather shirt and has armour class 14. In order to injure the troll, you must get 14 or higher on the D20. If you injure the troll, you will use another dice to determine the extent of the injury.