Ironclaw is a series of tabletop role-playing games featuring anthropomorphic characters. The first edition of Ironclaw was published in 1999. It is considered a part of the so called furry genre of role-playing games.

Ironclaw managed to develop a solid fan-following in the early 00s despite the heavy market dominance of the third edition Dungeons & Dragons and the d20 System developed for it.

All the Ironclaw games so far have been created by Jason Holmgren and published by the independent publisher Sanguine Games. 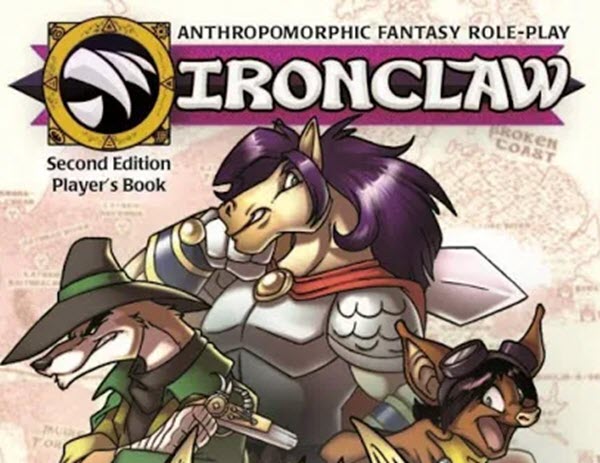 The setting and basic premise for Ironclaw was inspired by class and religious conflicts taking place during the Italian Renaissance.

Jadeclaw is a related game, with an East Asian setting.

The same system is used for several other role-playing games from Sanguine, including Jadeclaw.

Ironclaw is a staple at furry conventions such as Anthrocon, Furry Fiesta and Midwest FurFest.

Jason Holmgren is the creator of Ironclaw, and also a co-founder of Sanguine Productions.

Based in Cincinnati, USA, Holmgren is a role-playing game designer, art director and cartoonist. Early in his career, he was as a cartoonist for the independent gaming magazine Shadis, where his RPG-themed strip Joe Genero: Adventures of the Average Man made its debut in 1990.

Examples of other items on his resume are writing and illustrating The New Adventures of Fineous Fingers (also for Shadis), making cover illustrations for early issues of the comic book Knights of the Dinner Table, and being the head artist for Sheep on the Borderlands.

Sanguin Productions was established in 1998 and Ironclaw: Anthropomorphic Fantasy Role-Play was released a year later.

Examples of other Sanguine projects where Holmgren has served as head designer are Jadeclaw, Albedo: Plantium Catalyst, and Usagi Yojimbo.

Jadeclaw is a furry role-playing game set in the same world as Ironclaw, but in a kingdom located far away from the epicentre of Ironclaw. Designed by Chuan Lin, Jadeclaw is inspired by Chinese mythology. The setting for Jadeclaw is the kingdom Zhongguo (which means China in Mandarin), a place where anthropomorphic fantasy creatures controls the fates of Heaven and Earth. In line with the East Asian theme, Jadeclaw encompasses eastern martial arts.

Just like Ironclaw, Jadeclaw is published by Sanguine. Jadeclaw use the same system as the prior Ironclaw (combination of d4, d6, d8, d10, and d12 dice).

A notable difference between Ironclaw and Jadeclaw is that all characters in Ironclaw are based on mammals, while Jadeclaw also includes birds, snakes, tortoises, and creatures from Chinese legends, such as dragons. Among the non-player characters in Jadeclaw, we find creatures based on insects and scorpions.

Usagi Yojimbo RPG is a role-playing game using a heavily modified variant of the systems utilized for Ironclaw, Jadeclaw, and Albedo: Plantium Catalyst. Premièred in 2005, it is written by Jason Holmgren and Pieter van Hiel, and published by Sanguine.

The Usagi Yojimbo RPG from Sanguine is based on Stan Sakai´s comic-book series Usagi Yojimbo, where the main character is an anthropomorphic rabbit warrior living in a fantasy version of Japan during the early stages of the Edo period (early 17th century CE).